WHAT ABOUT STEINHOFF IN YOUR SATRIX FUND?

The collapse of the Steinhoff share price has left investors reeling.

Steinhoff International’s share price has plummeted by more than 80% over the last few days, falling from R56.26 at 30 Nov 2017 to just R10.00 per share at the close on 7 Dec 2017. CEO Markus Jooste has resigned from the company and an investigation into accounting irregularities has been launched. Needless to say, shocked investors in Steinhoff have lost large amounts.

Understandably we’ve received many questions from investors about what now happens to Steinhoff in the Satrix tracker funds. Following recent developments, will we keep the share, or will we sell it? Why did we hold it in the first place? Let’s recap how index tracking works to answer these.

Satrix funds are index-trackers and aim to replicate the performance of a given index as closely as possible. In order to do this, we hold each constituent of the index in the same weight as the index. The calculation methodology dictates how the index is constructed. For example, the FTSE/JSE Indi 25 is a grouping of the largest industrial companies listed on the JSE – Steinhoff is (still) one of these 25 companies.

Steinhoff is a constituent of a few indices that Satrix tracks, such as the FTSE/JSE: All Share, Top 40, Swix 40, Equally weighted Top 40, Rafi 40.

The Satrix Indi ETF tracks the FTSE/JSE Indi 25 index, holding each constituent in exactly the same weight as the index. Satrix Indi held 3.74% of the portfolio weight in Steinhoff at 30 Nov, as this was the weight of the company in the index. Given the significant drop in price, this weight was 0.69% at close of 7 Dec. 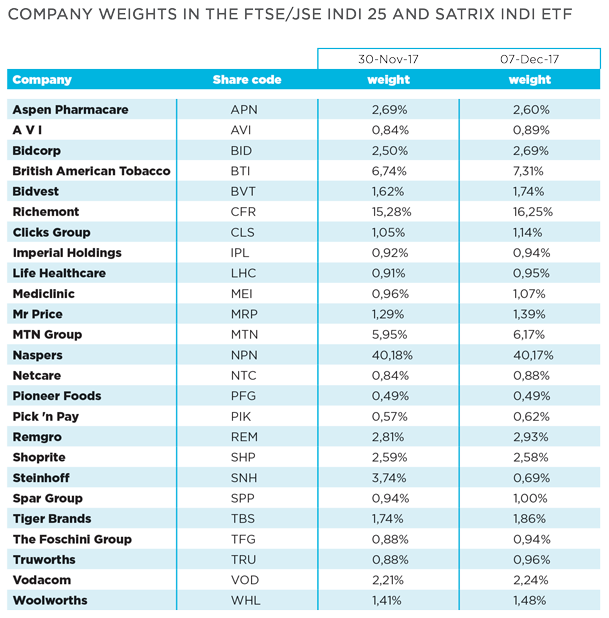 Steinhoff is still part of the FTSE/JSE index series, and therefore still included in the relevant Satrix portfolios. No index change has been announced in relation to Steinhoff and accordingly, there has been no trading of Steinhoff in the Satrix portfolios. There is also no index rule which indicates that a share should immediately be removed from the index following a significant drop in price.

FTSE/JSE indices are reviewed quarterly. The December quarterly review has recently been announced and will be implemented next week. The next index review will be in March 2018, though we can’t at this stage predict how Steinhoff will be affected.

In addition to the quarterly review, Satrix monitors all interim index changes and will implement them in the index-tracking portfolios accordingly.

See What's new in the Top 40 - March index review which shows the deletion of Steinhoff in the relevant indices effective 19 March 2018.